Our journey with Isaiah's first wheelchair has been quite the learning experience.  Before we had Isaiah's chair, I'd talk to other parents of kids in wheelchairs or adults in chairs, my head would spin when we talked about camber, seat depth, etc etc.....but now that we're 4 months in, I'm feeling a little more confident...at least in terms of Isaiah's chair.

We've loved his chair, and even though it was custom-built for him (you won't usually find a 7" wide wheelchair), but there are some aspects that were just not working for him so as the months have gone by, I've been slowly tweaking things (thanks to the advice and help of many fellow OI parents), and seeing a big difference in how Isaiah sits and moves. 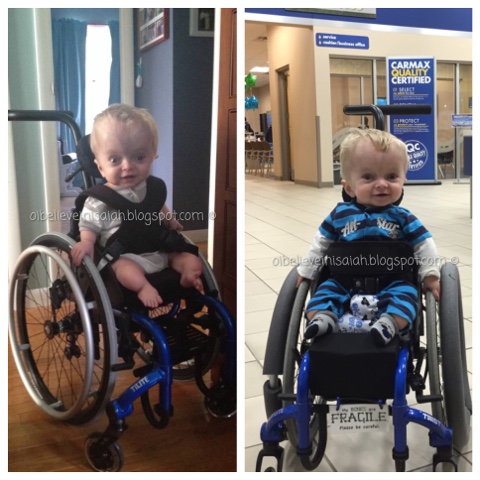 I'm a nerd and made a comparison photo below to explain for those interested in learning about Isaiah's chair and for those who may be looking for a wheelchair for their kiddo.  Please know, I don't know one person who finds their chair "perfect", tweaks always seem to be necessary, and they seem to come naturally. 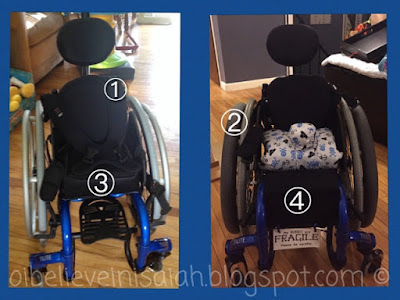 1) The harness-  The original harness was a gigantic harness system that clipped over Isaiah in four different spots.  It was WAY too big for him.  It's since been replaced by the DME (the medical equipment company) with a smaller one, but I kind of hated all the clipping and unclipping of the buckles, so thanks to a local OI family, I was able to swap out the clipping harness system with a velcro one. 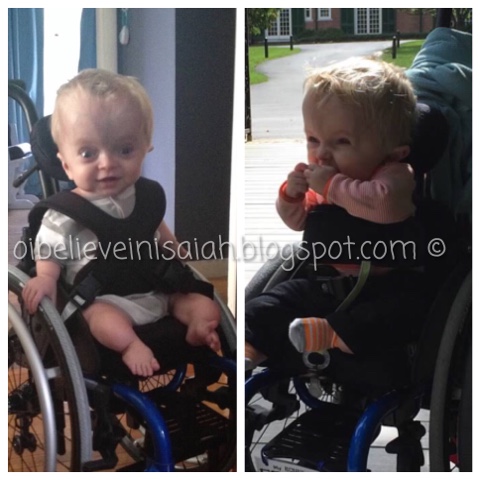 SO much easier....a little too easy.  Isaiah learned to take it off.  I've since added a load more velcro which curbed the problem, but we've also agreed to allow Isaiah to keep the harness off in certain situations (in our house, at the hospital under my close supervision).  He is really good about the harness.  If we are out and about, he puts the harness over himself as soon as we get him in his chair and out of the car.  (Hello there, independence.)

2) Added pipe insulation over the wheels' push bars- I should have the bars taken off since Isaiah doesn't use them, but that involves taking the wheels somewhere and having them deflated so that we can unscrew every darn screw on there.  Who has time for that?  Isaiah had started putting his hands down in between the bars and the wheels and worrying me that he'd hurt himself or get stuck...so one of the guys from the DME suggested putting the insulation on and we love it!  It's no added weight and actually makes it easier for Isaiah to try to grasp the push bars.  It also blocks his ability to put his little hands where they don't belong....they are easily removable and protect my walls. ;-)

3) My favorite change- the cushion!- The cushion that Isaiah's chair came with is fabulous...very well made foam, comfy to sit on....but it was just too long.  His legs sat entirely on the seat with just his feet hanging off, and that really hindered his strength in pushing.  The seat was originally perfect on the day we got the chair, because the backrest was more forward than it is now...but then he couldn't reach the wheels to push himself and pushing himself was the whole point(!).  So we had to push the backrest back a few inches, taking away his ability to "short sit" (short sitting is how a person typically sits in a chair/stool...knees and hips at 90 degree angles, feet flat).  I let it stay that way for far too long (because cutting the seat freaked me out- that cushion is expensive! and I thought he'd be getting rods surgically placed in his legs sooner rather than later, which would lengthen his legs a small amount, so I didn't want to make changes to just change it again right away), until one day I went to our local craft store and picked up a piece of foam remnant for $5.  (Mind you, a few of my best OI mom gal pals talked me into and through this.)  I measured Isaiah from butt to knees while he was sitting and cut a piece of foam to fit.  I removed the original cushion from its cover and put the new piece of foam inside the case, placing it on Isaiah's chair....and he was sitting so much better!  Of course, his legs were just dangling until I added #4 (see below), but he was on his way to short sitting!  As a few weeks went by, I noticed he was sliding in his seat, which had me a bit nervous, so one of my OI mama friends sent me the cushion cover Isaiah is currently using- and it includes a pommel, which holds Isaiah in place.  Also, the fabric has skulls on it...which is the most important fact here, obviously. ;-)

4) The last big change I made to the chair was adding a place that Isaiah can rest his feet.  The footrest that came with the chair only comes so high, so when I made it so Isaiah could short sit, I also used a piece of foam to create a rest for his feet.  I've snazzed it up with fabric now and had to make it a little taller when we added the pommel cushion since that cushion is a little bigger, but it works really well under Isaiah's feet.  it gives him a proper place to rest them and bear weight on his legs while he propels himself in his chair.  Since we've added this cushion, Isaiah moves so much faster. 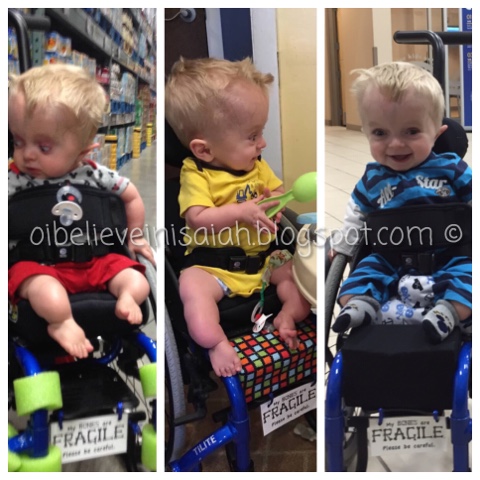 I'm sure we'll continue to change Isaiah chair to meet his needs as time goes on (we also added a bike cup holder on the back using a zip tie to hold Isaiah's cup of water...at some point we hope to find a way to add it to the front. :)
Posted by OIbelieveinIsaiah at 6:30 AM