Did I ever tell you that when I was 15 weeks pregnant with Isaiah, I experienced some spotting?  (TMI? sorry.)  Dave and I went in to for me to get checked out and everything "looked great".  The ultrasound tech focused on measuring the amount of amniotic fluid and the condition/location of the placenta...they took a brief look at "the fetus" mainly focusing on the organs.

I remember thinking "where is his arm?" as you couldn't see one of them...but the tech assured me "it was fine".  The baby "looked great" and it was likely due to positioning but it worried me.  (Now thanking back, I wonder if he was self-splinting.)

The tech also noted Isaiah was breech (the term "breech" is in regards to a baby's position in utero- it meant his head was "close to my heart", as I lovingly coined it, and feet were to the floor- opposite of the position he should have been hanging out in).  Isaiah was always breech.

But I ate up that "the baby looks great".  It reassured me.  Seeing the wiggly little monster up on the screen, hearing the heartbeat?  We were so very in love.  So eager for our "healthy" baby.
___________

I used to be a big Grey's Anatomy fan...back in the beginning with George, Christina, Alex, Izzy.....but then it's character lineup changed so much and I couldn't keep up so I just moved on (you were wondering, right? Clearly. ha) ...but yesterday, I was recommended to watch it (actually, Greys talk completely blew up my Facebook newsfeed), and there were about 15 min here and there throughout the show that had me flashing back and holding my breath.

See this couple?  They are doctors on the show.  And they are about to (fictionally, obviously) go through what Dave and I, and many parents that I now connect with have been through.

The doctors on the show have diagnosed the baby as OI type II (maybe type III).  The baby's skull is undermineralized, in a breech position, and legs are "budda-like."

When the girl who did the ultrasound first showed the blond doctor, Arizona, and I heard her mumble "type 2, maybe type 3", I held my breath.

Is this what it was like after all of our ultrasounds?  Did the doctors sit and discuss together, trying to figure it out?  Did they go to a know-it-all doctor in the hallway who matter of factly stated that Isaiah would die at or soon after birth?

At 24 weeks, when we went to the first children's hospital, and we had an entire day of ultrasounds and tests run....and we were so exhausted.  They brought us into a closet-sized room, with two round tables pushed together, surrounded by chairs, with a box of tissues in front of the chairs they wanted us to sit in....and they handed us a folder with this... 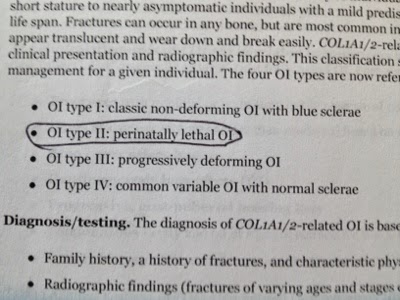 They verbally said that it could maybe possibly be type III, but if so, it would be very extremely severe.

They told us we had a decision to make; we had to decide who the important patient was- Isaiah or myself.  Based on that, we'd decide what type of birth to go with (but a c-section is major abdominal surgery.  "Are you sure you'd want to go through that and never get any time with your baby while he is alive?"). 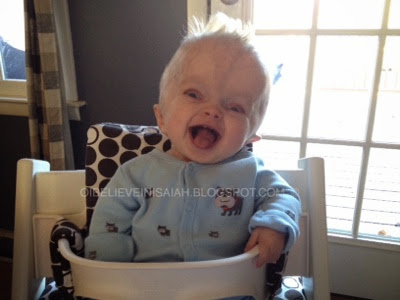 I'm sucked in for the rest of the season.  I hope the writers of Grey's Anatomy have a positive OI storyline.  A popular show on a major network has the potential to show that OI is not always a show stopper.  Thanks to today's medical advances and therapies....those with OI are doing better than ever before.  Will they show that? Or will they have that doctor's diagnosis correct and make way too many viewers' hearts break and make them think that severe OI is a death sentence.

OI is not always as grim as doctors first diagnose when they see it in utero.

And hey, Shonda Rhimes....if you are looking to cast an adorable boy with severe OI...I know a really cute guy ;-) 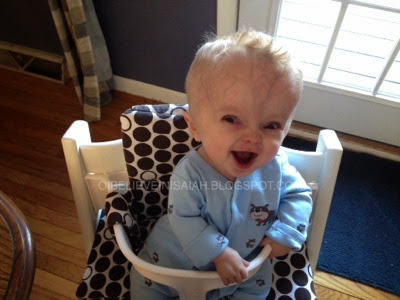 Posted by OIbelieveinIsaiah at 9:36 AM