In mid-January, we had our most recent pamidronate treatment.  Isaiah and I were lucky enough to have daddy come along! 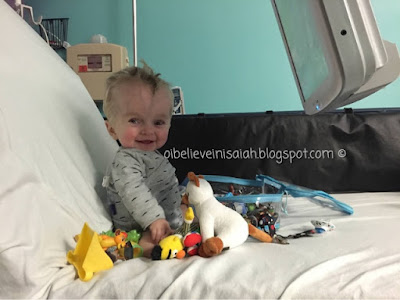 The first day is always busiest since the nurses need to weigh Isaiah, get his port accessed, get blood work, etc...but he handled it all like such a champ this time!  Even after waking up ridiculously early... 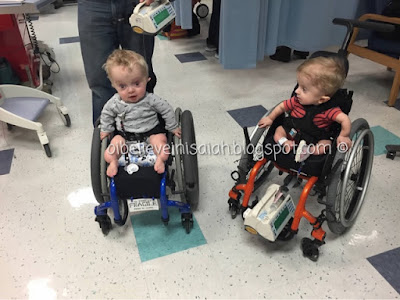 Once his Pam was flowing, we saw Dr B and his PA, gave them the run down of everything, and entertained ourselves with our buddy Gavin and his dad.

Once we were finished at the hospital, we spent time napping in our room at the Ronald McDonald House (fun fact: they just finished renovations and we got to stay in a new room! Funner fact (I know funner isn't a word but it just flows, ok?): We stayed in the same room that Dave and I stayed in when Isaiah was first born and transferred to DuPont after he was born.) 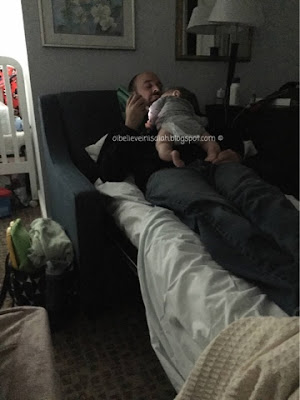 and by napping, I mean I got to nap while Dave and Isaiah cuddled and played on the iPad because WHO NEEDS SLEEP? Not this crazy two year old.

We "rested" and had fun in one of the play rooms at RMH until it was dinner time and it was there that Isaiah rode this way cool rocking horse!! 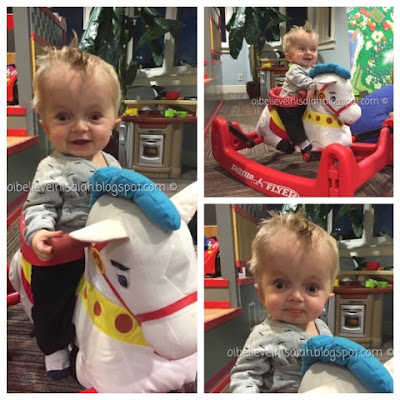 I've eye-balled that thing every trip, but was always too intimidated to put him in...but with Dave's help, we successfully got him in and he loved rocking and yelling "giddy up!") ...and I even put him in again the next day by myself!  Woot woot!

After dinner, Isaiah was worn out (thank goodness...), and slept like a rock.  Day 2 of Pam (Isaiah's infusions last a few hours a day for 3 days) went off without a hitch.  We actually made record timing and were out of the hospital before noon that day! (Seriously, it was a record.)

We had lunch over at the House... 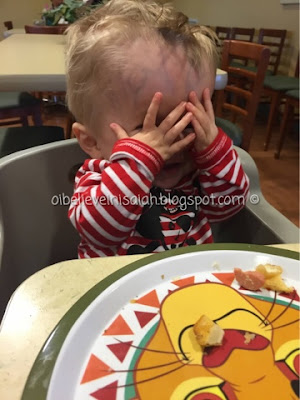 And then treated ourselves to dinner out at TGI Fridays (yay gift card!).  Isaiah was so cute at dinner, playing happily with his Captain Hook toys....acting things out, saying "tick tock tick tock..." 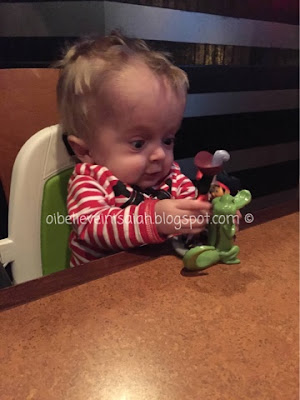 Showing us that he is really growing up!

After dinner, we cleaned up our room and got it ready so that we could check out of the McDonald House in the morning before headed up bright and early to the hospital and then it was time for the last day of Pam! 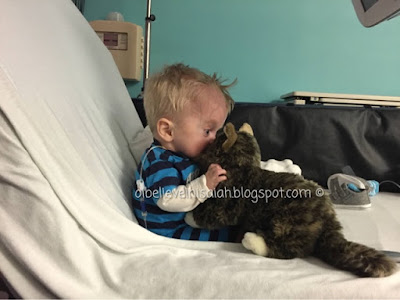 Isaiah spent time playing with his toys, had an echocardiogram done to check his heart (still waiting on the results but the tech saw no abnormalities...woo hoo!), and before we knew it, the morning was over, they were de-accessing his port, and we were out the door and on our way HOME. 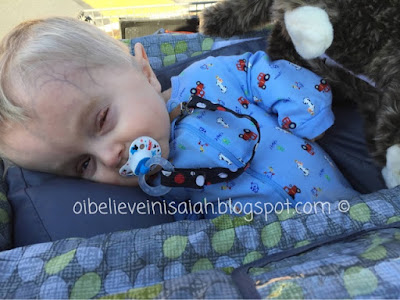 The next few days required a certain someone to catch up on sleep.....even in the grocery store. haha :)

This week we've been dealing with a suspected tibia (lower leg) fracture.  His doctors know and we're caring for it at home thus far, splinted and giving medicines prescribed by his OI docs....the nights have been tough but his days are happy.  We're hoping to avoid X-rays on this one and praying for continued healing. <3

Oh, and Mr Isaiah turned two and a half yesterday!  I can't believe it's only 6 months until he turns 3! Time sure flies when you're a parent...

Happy Valentine's Day! <3
Posted by OIbelieveinIsaiah at 6:30 AM