Oh my goodness guys, so many changes in our life lately!

First of all, Isaiah officially became a big brother one month ago today! 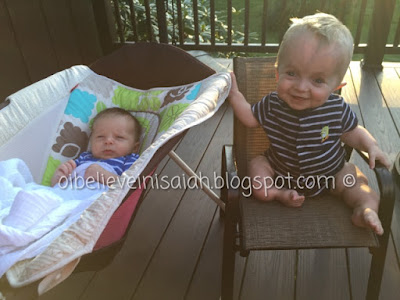 And then today he became a preschooler! 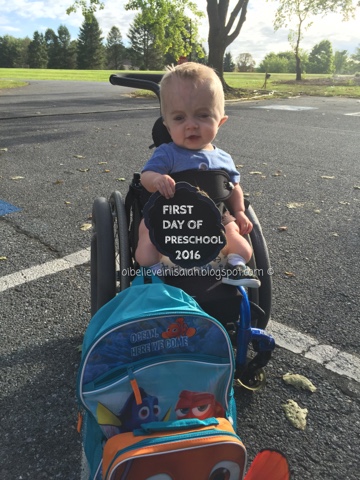 Our adventures of getting Isaiah into preschool started in the late spring, where we began the process of an IEP for Isaiah.  IEP stands for Individualized Education Plan.  It's a very thorough document that a team of people (including myself) put together to form goals for the child.  Back in May I took him to a local facility to get tested and where I was asked a ton of questions about him.  He was quite uncooperative for his portion which in the end was to his benefit as it helped him to qualify to continue receiving physical therapy, occupational therapy, and speech therapy (he aged out of the Early Intervention program when he turned three years old). 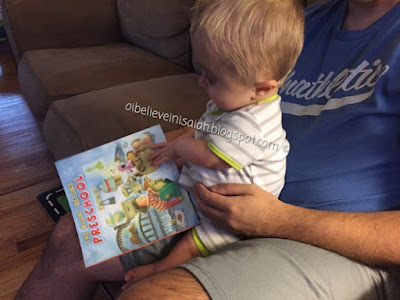 In July, we went over details and came to an agreement on the plan that the teachers and therapists put together.  The plan was for Isaiah to go to preschool after he turned three (and after we had his baby brother).  We're starting out with just two half day sessions a week and will hopefully move to three days a week next year.  While he is in school, he has a one-on-one by his side; I pushed for that one-on-one to be a nurse as there is no nurse on property at his preschool.  That aspect took some work on my part (and some extra time to set up) but thankfully after calling five nursing companies, we found one willing to take on Isaiah as a patient.  His nurse meets us at our house and I drive us over to school to drop them off and pick them up. 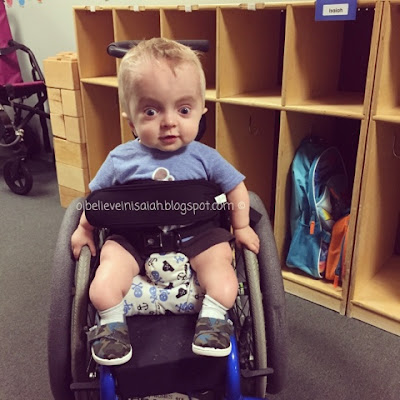 His nurse is super sweet and a mom of two as well.  She was a very fast learner with how to pic Isaiah up (since we still never lift him under his armpits), put him down, and dress him.

Today was Isaiah's very first day.  Honestly, I didn't expect it to be but everyone agreed on Tuesday so we went with it; it was a bit of a whirlwind.  The school I chose uses reverse mainstreaming.  60% of Isaiah's classmates are typical and 40% of the class has varying needs.  It's wonderful because it teaches children at a young age to accept different. 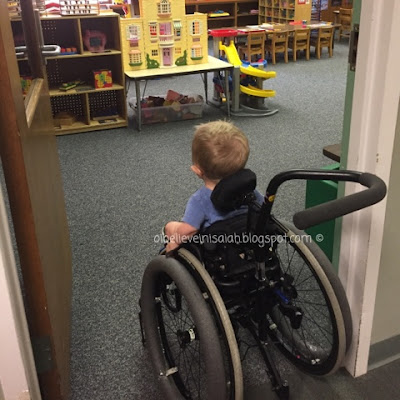 When I dropped Isaiah off, I stayed for a few minutes while the other kids came in.  His class is mostly boys.  They were all very excited to meet their new classmate and the coolest part is they saw him- I heard one asked about his chair but other than that they just saw "Isaiah", the new boy in class.  He was very excited by all the toys in the classroom and would announce when he saw something he liked ("XYLOPHONE!") and his friends loved handing him what he was asking for. I decided to leave when I saw the whole class had arrived but he was so enthralled that I just snuck out (and yep, totally bawled in the car.)

To say that Isaiah loved it was an understatement.  His nurse told me that he spent most of the time smiling and laughing.  When I picked him up and we locked eyes and he just lit up!  He started excitedly waving at me and yelled "HIIIII" which just made my heart burst into a million pieces.  He was WIRED for hours.  When we got home, he inhaled his lunch and looked so very exhausted but instead of napping, he just excitedly rolled around in his bed giggling and saying his one classmate's name. 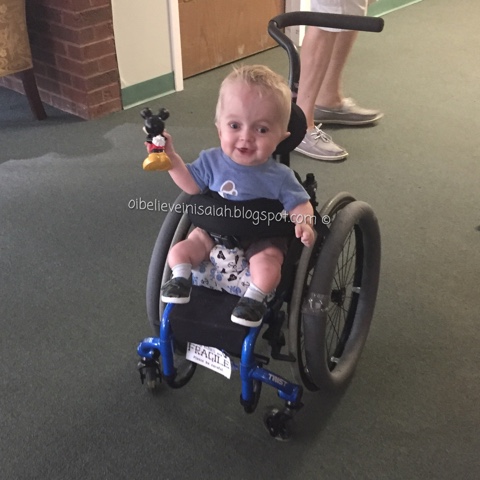 I do believe this was a good decision to start Isaiah in preschool...I was hesitant because he just turned three but Isaiah needs that social interaction.  It's just going to help him soar, I can just feel it.  I have to get used to such a quiet house for the time he is in school though...:)
Posted by OIbelieveinIsaiah at 8:42 PM

Email ThisBlogThis!Share to TwitterShare to FacebookShare to Pinterest
Labels: preschool