Isaiah has come a long way in terms of his physical therapy.  Lately our focus has been on two things: head/torso control and reaching.

Isaiah can be a stubborn boy sometimes...not sure where he gets that from.... :-P but he's especially stubborn with tummy time.  We had a system of working on it on an incline on the floor but he refuses to lift or hold his head up...

But he will keep his head up when on me or on an exercise ball so that's what we've been focusing on.  We spent every day for about 3 weeks (then the holidays happened and we took an unintentional break.  whoopsie.  Back to it today!) spending some time on the ball, and quickly learned that he will work for Disney Junior. 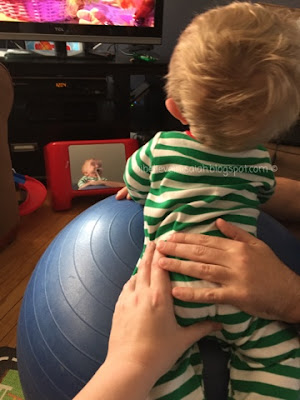 We've heard every song from his new obsession, The Lion Guard, more times than I care for, but if it keeps him inspired to hold himself up, bear weight on his arms, and enjoy it...well, I'll listen to it 500 times a day if I have to. 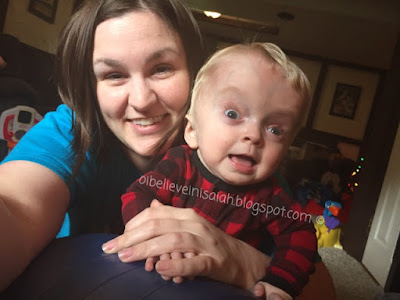 Isaiah's PT has also given us a great tip to pause the video when he needs to rest, as that pause pushes him to keep himself going (because he wants to watch and sing along). 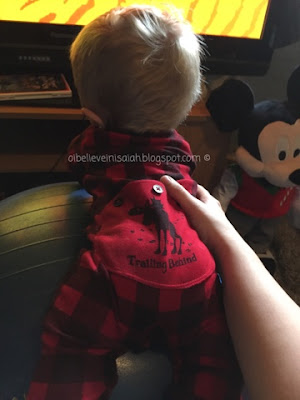 Isaiah is tolerating 5 minutes of tummy time without a break, holding his head up the entire time, and that's a huge win for us.  He's even rolling over onto his belly more when not working on tummy time, choosing it because it's comfy, but we just need to figure out how to get him to get the confidence to put his head up when not on the ball or on us and he'll be golden!

The other skill we're having fun mastering is reaching...reaching to the point of getting him to lift a cheek off the ground. 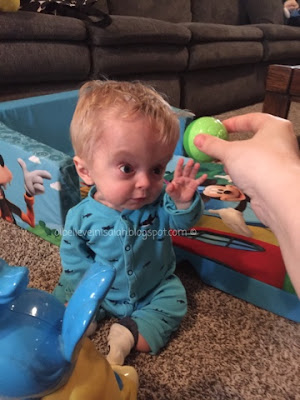 We're hoping this will strengthen his core and get him on the way to "scooting" around independently. 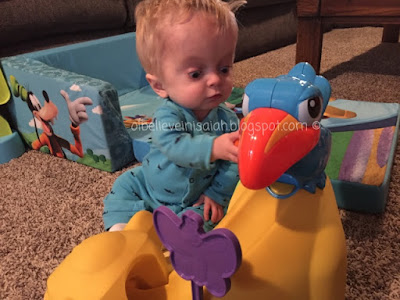 He is so insanely inspire by everything Lion Guard....so do me a favor and don't tell him this toy is from Lion King haha. 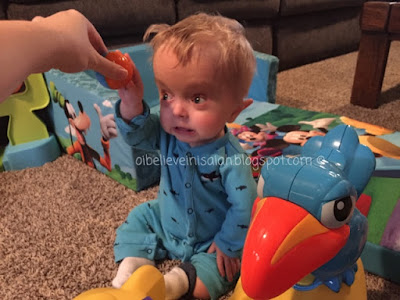 We just had a two week break from all things therapy thanks to the holidays....although we enjoyed the break, it'll be nice to get back into the swing of things with Isaiah's physical therapist, occupational therapist, and speech therapist this week.  We're excited for more ideas to continue to implement into our daily routines. :)
Posted by OIbelieveinIsaiah at 7:00 AM